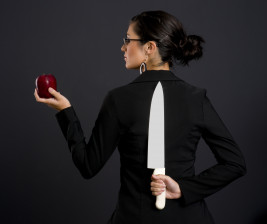 Who knew? A quiet movement has been afoot in the resurgence of artisanal letterpress printing. Mixing politics, feminism, and current events with creative, upbeat, and often downright edgy greeting card messages, a network of women-owned businesses has emerged as the voice of the small-shop letterpress trade.

When Paper Source, a national chain of stationery stores, filed for Chapter 11 bankruptcy, the network swung into action, a virtual social media David slinging shots at the corporate Goliath that had just informed approximately 250 cardmakers that they might not be paid in full for their recent shipments of finished goods. Adding insult to injury is the perception among the network that Paper Source had placed unusually large orders from these small independent print shops well in advance of the Spring holidays. They believe that Paper Source management would have, or least should have, known that all payments on those orders would be placed in suspension while the bankruptcy process plays out. Even more irksome, according to some of the cardmakers, Paper Source aggressively pushed for expedited deliveries, apparently to avoid the priority granted in bankruptcy to vendor payments due for products delivered within the 20-day period immediately prior to the bankruptcy filing.

The first shot was slung at Paper Source by the owner of Sapling Press, a letterpress printing shop in Pittsburgh, when she posted “Hell hath no fury like a stationer scorned” on Instagram….

How Tesla will open up its Superchargers to other EVs

Tesla CEO Elon Musk has, for years, talked about opening up his company’s vast Supercharger network to other electric vehicles. But earlier this month, Musk tweeted that Tesla plans to do this “later this year,” and this week, he...

Official Technology Partner Cisco has extended its commitment to Cityzens Giving’s digital learning network, which drives year-round connectivity across projects and young leaders globally. Launched in July 2020, off the back of our first ever virtual Young Leaders Summit,...